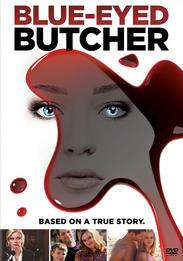 BLUE-EYED BUTCHER is the shocking true story of a wife and mother driven to kill by her abusive husband, starring Sara Paxton (The Innkeepers), Justin Bruening (TV's "Ringer") and Lisa Edelstein (TV's "The Good Wife"). Susan (Paxton) met handsome salesman Jeff (Bruening) on vacation and their storybook romance quickly led to marriage and a family. But Jeff's drug use, immaturity and explosive temper led to violent episodes with Susan and their kids. Pushed to the very edge, she tied up her husband and stabbed him in their bed. Was she a battered prisoner of her suburban home or as the tough-as-nails prosecutor (Edelstein) argued, a calculating, cold-blooded murderer?