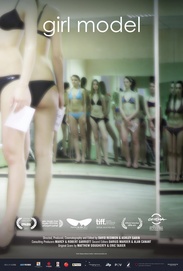 Despite a lack of obvious similarities between Siberia and Tokyo, a thriving model industry connects these distant regions. GIRL MODEL follows two protagonists involved in this industry: Ashley, a deeply ambivalent model scout who scours the Siberian countryside looking for fresh faces to send to the Japanese market, and one of her discoveries, Nadya, a thirteen year-old plucked from the Siberian countryside and dropped into the center of Tokyo with promises of a profitable career. After Ashley's initial discovery of Nadya, the two rarely meet again, but their stories are inextricably bound. As Nadya's optimism about rescuing her family from their financial difficulties grows, her dreams contrast against Ashley's more jaded outlook about the industry's corrosive influence.

GIRL MODEL is a lyrical exploration of a world defined by glass surfaces and camera lenses, reflecting back differing versions of reality to the young women caught in their scope. As we enter further into this world, it more and more resembles a hall of mirrors, where appearances can't be trusted, perception become distorted, and there is no clear way out. Will Nadya, and the other girls like her, be able to find anyone to help them navigate this maze, or will they follow a path like Ashley's, having learned the tricks of the labyrinth but unable to escape its lure?