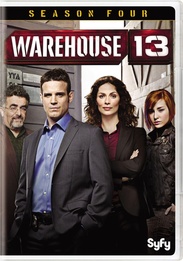 Prepare for more paranormal thrills, chills and excitement as Warehouse 13 returns with more action-packed mysteries than ever before! After the destruction of the Warehouse, the agents risk the use of a mythical artifact in an attempt to restore all theyve lost. But the use of this dangerous artifact could change the Warehouse team and the world forever. Featuring guest appearances by Brent Spiner (Star Trek: The Next Generation), Sam Huntington (Being Human) and other sci-fi favorites, this five-disc set includes all 20 Season Four episodes plus a cache of classified bonus content including a never-before-seen chapter of the animated web series Grand Designs.