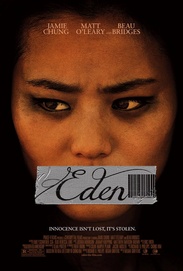 After a night out with friends, Hyun Jae (Jamie Chung) accepts a late night ride home from a young firefighter. What begins as a night of promise quickly turns into a nightmare when she is abducted and imprisoned in Vegas as a sex slave. Renamed "Eden", she learns she must build the trust of her captors (Matt O'Leary) and sacrifice everything in a desperate plea to survive.