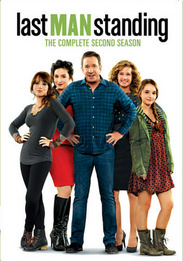 Tim Allen returns for a second season in Last Man Standing as traditional manly man Mike Baxter, who continues to be surrounded by forces seeking to complicate and feminize his world. While Mike is king of the hill at work, he's the odd man out in a home that is dominated by women - namely his wife, Vanessa, (Nancy Travis) and their three daughters.