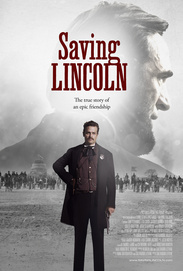 Based on a true story. When Abraham Lincoln (Tom Amandes) is elected President, he brings only one friend to Washington: his banjo-playing, joke-telling former law partner and confidant, Ward Hill Lamon (Lea Coco). Lamon is also large and handy with a gun, and when the first assassination attempt occurs in 1861, Lamon appoints himself the Presidentâs bodyguard. He serves Lincoln faithfully throughout the four years of the Civil War and from this unique perspective, Lamon witnesses every aspect of Lincolnâs fiery trial as Commander-in-Chief, from the constant military and political pressure, to the personal losses of friends and family members. Lamon soothes Lincolnâs tormented soul, saves him from repeated attempts on his life, and introduces him at the Gettysburg Address. Lamon is not present on that fateful night at Fordâs Theater in 1865 because Lincoln sends him on a mission, yet it is Lamon who redefines that tragic event in a surprising and uplifting manner. This visually unique film features sets created from actual Civil War photographs.