The Killing: The Complete Second Season 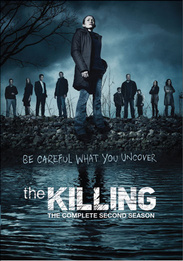 TV's most addictive crime series returns for another season of slow-burn suspense and gripping drama. In season two, homicide detectives Sarah Linden (Emmy nominee Mireille Enos) and Stephen Holder (Joel Kinnaman) resume their investigation into murder of a Seattle teenager, only to discover it may be part of a larger, more explosive conspiracy. As the case unfolds, it triggers shocking revelations and stunning twists that will keep you guessing until the riveting season conclusion...when the killer of Rosie Larsen will finally be revealed.