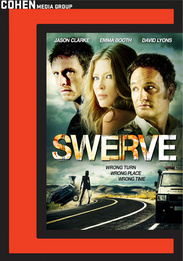 Driving cross-country to a job interview, Colin opts for a shortcut and happens across a fatal car accident. One of the drivers, the intriguing Jina, is shaken but not hurt, while the other lies dead  leaving a suitcase full of money without an owner. Colin resists temptation and hands it into the local cop, wanting to get on his way. But what initially seemed to be a good deed prompts a series of strange events to unfold, where nothing is quite what it seems, and Colin quickly finds it hard to leave town. Pulsing with menace, the sexy and explosive thriller Swerve re-orients the noir tradition, setting a deadly game of survival against the quiet backdrop of the South Australian outback.

Rated R for violence, language and some sexuality/nudity.