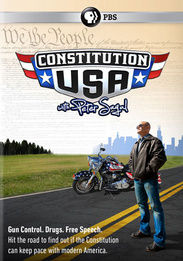 Major broadcast, online, education and social media project aimed at making the US Constitution understandable and accessible for 21st century Americans. Its centerpiece is a series hosted by Peter Sagal, featuring constitutional experts, powerful readings from celebrities, inventive animations, and stories from around the country to illuminate the history of the Constitution, what is in it, and how this essential document impacts every American today.