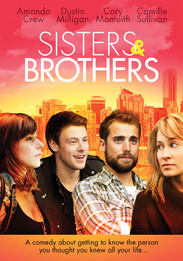 Cory Monteith of "Glee" and Dustin Milligan of "90210" star in the ensemble comedy-drama that takes a surprising look at sibling dysfunctions: Hollywood star Justin (Monteith) and his struggling brother Rory (Milligan) uneasily confront the true price of fame. Long-bickering sisters Nikki (Amanda Crew of CHARLIE ST. CLOUD) and Maggie (Camille Sullivan of "Red Widow") are thrown together on a road trip gone wrong. Louise (Gabrielle Miller) struggles with the challenges of caring for her mentally ill brother (Benjamin Ratner). And spoiled teen Sarah (Kacey Rohl of "The Killing") is about to meet the gentle half-sister she never knew she had. Tyler Labine (TUCKER AND DALE VS EVIL) co-stars in this acclaimed charmer about the responsibilities, resentments and love that can only come between SISTERS & BROTHERS.