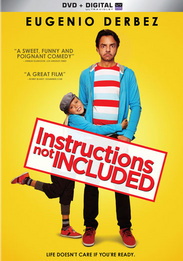 Valentin (Eugenio Derbez) is Acapulco's resident playboyuntil a former fling leaves a baby on his doorstep and takes off without a trace. Valentin leaves Mexico for Los Angeles to find the baby's mother, but only ends up finding a new home for himself and his newfound daughter, Maggie (Loreto Peralta). An unlikely father figure, Valentin raises Maggie for six years, while also establishing himself as one of Hollywood's top stuntmen to pay the bills, with Maggie acting as his on-set coach. As Valentin raises Maggie, she forces him to grow up too. But their unique and offbeat family is threatened when Maggie's birth mom shows up out of the blue, and Valentin realizes he's in danger of losing his daughter- and his best friend.