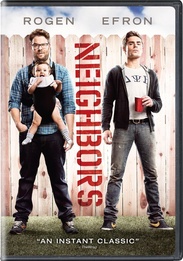 Seth Rogen, Zac Efron, and Rose Byrne lead the cast of Neighbors, a comedy about a young couple suffering from arrested development who are forced to live next to a fraternity house after the birth of their newborn baby.

Rated R for pervasive language, strong crude and sexual content, graphic nudity, and drug use throughout.