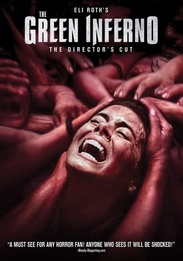 The mastermind behind the Hostel franchise and Cabin Fever serves up a feast of gut-wrenching terror in this gruesome fear-fest from horror auteur Eli Roth. Determined to protect the Amazon rainforest, a group of student activists fly to Peru only to crash-land deep in the jungle. Captured by a pack of bloodthirsty cannibals, the survivors suffer unspeakable acts of butchery at the hands of the very tribe they were trying to save. A non-stop barrage of carnage and chills, The Green Inferno is an unhinged blast!