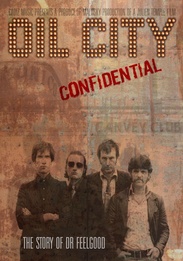 Julien Temple's acclaimed, award-winning documentary Oil City Confidential is available once more as a Tenth Anniversary special edition in exclusive limited Oil City tin with bonus DVD of Wilko Johnson - 'Live In London. This is the story of Dr Feelgood, four men in cheap suits who crashed out of Canvey Island in the early '70s, sandpapered the face of rock'n'roll, leaving all that came before a burnt-out ruin - four estuarine John-the-Baptists to Johnny Rotten's anti-Christ. Taking London by storm, they sped through Europe and conquered the UK with No 1 chart success, before imploding just as punk was born and America beckoned with open arms. Contributions from members of The Clash, Blondie and The Sex Pistols join Dr Feelgood with collaborators Jools Holland and Alison Moyet to tell the story of Canvey, '70s England and the greatest local band in the world.