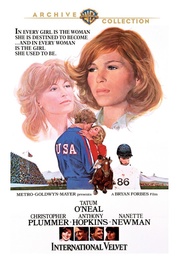 For a compelling drama that has all the excitement and suspense of a closely run horse race, International Velvet is the odds-on favorite for all the family! Sarah Brown (Tatum O'Neal) is an orphaned teen determined to win the Olympic gold medal for riding. Anthony Hopkins is the tough, no-nonsense trainer who teaches her the meaning of true dedication. He's there to help as much as he can, but on the day of the big race, it will all be up to Sarah. This modern sequel to the classic, beloved tale of a young girl's steely-nerved race for the winner's circle is nothing short of sensational -- due in no small part to the film's engaging script and a superb cast headed by Hopkins and Christopher Plummer. And, as the strong-willed girl who proves to one and all the stuff of which she's made, Tatum O'Neal steals the show with a deeply moving performance.