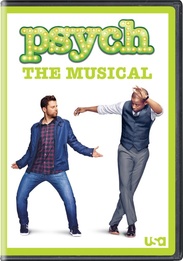 Shawn (James Roday) and Gus (Dulé Hill) brave uncharted territory when they add music to a murder mystery centered around Jack the Ripper. When a mad playwright escapes from a psychiatric hospital, the body count begins to stack up. All signs point to Zachary Zander, or Z, whose Ripper-inspired play went down in flames years prior. Could it be that Z is out to exact revenge on those associated with his failed production? Toes will tap and heads will roll in this suspenseful yet comical feature-length musical, featuring the long awaited return of Yang (Ally Sheedy, The Breakfast Club), who holds the key to Zs master plan.