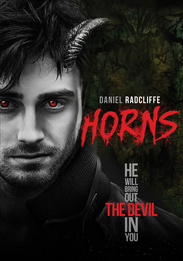 Daniel Radcliffe stars in this twisted new thriller, based on the best-selling book by Joe Hill. Blamed for the murder of his girlfriend, Ignatius Perrish (Daniel Radcliffe) awakens one morning to find he's grown a pair of horns. Armed with new supernatural powers, he sets out to find the true killer.

Rated R for sexual content, some graphic nudity, disturbing violence including a sexual assault, language and drug use.