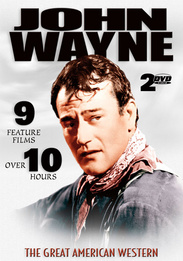 The King of Westerns, John Wayne takes on roles as bad guys, good guys and a man in love in this nine film collection. From a government agent to a stagecoach racer, Wayne's various characters have the same goal in mind - to enforce their own justice in the Old West.