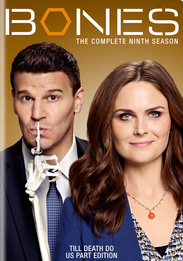 And since dealing with death is part of their jobs, it probably wonât part FBI Special Agent Seeley Booth (DAVID BOREANAZ) and quirky forensic anthropologist Temperance Brennan â aka Bones (EMILY DESCHANEL). But Bones and Booth must still address serial killer Christopher Pelantâs threat to murder five people if the couple marries. Meanwhile, they work to solve murder mysteries involving a terrorist, a man who shows up at his own funeral, and dancing vegetables, among others, as they devote themselves to each other and their young daughter. Now with this DVD set, you can love, honor and cherish all 24 smart, funny Bones Season 9 episodes all over again, and get EXCLUSIVE BONUS FEATURES, including a behind-the-scenes look at the wedding episode.