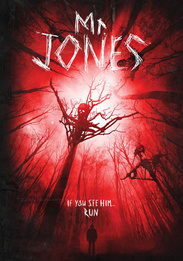 Scott (Jon Foster of Stay Alive) and Penny (Sarah Jones of âSons Of Anarchyâ) just moved to a remote cabin to escape the pressures of the world and breathe new life into their art. They will soon discover they are not alone: an infamously reclusive artist â known only as âMr. Jonesâ â lives nearby. He doesnât like to be disturbed, and only comes out at night when he drags his strange, sinister sculptures deep into the woods. But when Scott and Pennyâs curiosity leads them to venture too close for Mr. Jonesâ comfort, he plunges the young couple into a nightmare world of mayhem, madness and mind-bending terror. Diane Neal (âLaw & Order: SVUâ) and David Clennon (John Carpenterâs The Thing) co-star in this startling tale from debut director Karl Mueller (writer of The Divide) and from the producer of the Sundance hit The Pact.

Rated PG-13 for terror, frightening images, a scene of sexuality and brief language.