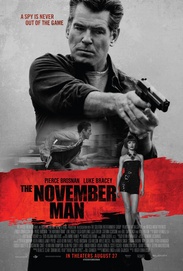 Code named 'The November Man', Peter Devereaux (Pierce Brosnan) is a lethal and highly trained ex-CIA agent, who has been enjoying a quiet life in Switzerland. When Devereaux is lured out of retirement for one last mission, he must protect valuable witness, Alice Fournier, (Olga Kurylenko). He soon uncovers this assignment marks him a target of his former friend and CIA protÃ©gÃ© David Mason (Luke Bracey). With growing suspicions of a mole in the agency, there is no one Devereaux can trust, no rules and no holds barred.

Rated R for strong violence including a sexual assault, language, sexuality/nudity and brief drug use. Studio surrendered the rating.