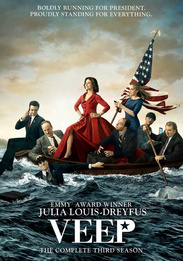 VEEP, created by OscarÂ® nominee Armando Iannucci, follows the whirlwind day-to-day existence of Vice President Selina Meyer. Following the revelation that the President will not seek re-election, the Veep begins eying a promotion. With all of America now watching her and her team, Selina and her staff head off to Detroit and Silicon Valley, go on a drug bust with the Maryland Coast Guard, and fly to London to confer with heads of state.