It's Always Sunny in Philadelphia: The Complete Season 9 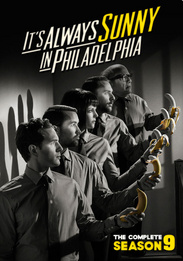 The gang returns for their most inappropriate adventures yet in Season 9 of Itâs Always Sunny In Philadelphia. Once again, Paddyâs Pub is the spot for clever cruelty and tasteless tomfoolery as Dee and Charlie get roped into a pyramid scheme and Dennis reveals he has super-powered erections. Season 9 also features âThe Gang Saves The Day,â the showâs historic 100th episode. While trying to âstopâ a convenience store robbery, Frank hotdogs it, Charlie gets animated and Mac takes a ninja star to the neck!