The 100: The Complete First Season 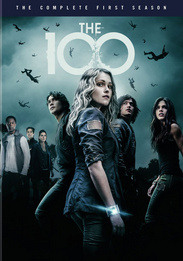 Ninety-seven years after nuclear Armageddon destroyed our planet, humanity's sole survivors live on the Ark, an aging space station experiencing overpopulation and inadequate resources. When faced with difficult choices, the Ark leaders-chief medical officer Abby, Chancellor Jaha and the mysterious Kane-decide to send 100 juvenile prisoners back to Earth to test its living conditions. Among them are Clarke, Abby's bright daughter; Wells, Jaha's son; the daredevil Finn; and siblings Bellamy and Octavia. With the survival of all in their inexperienced hands, The 100 young people must learn to rise above their differences and forge a new path on a wild and dangerous landscape that teems with radioactive waste, turbulent weather and unimaginable predators...or face the ultimate extinction of the human race!