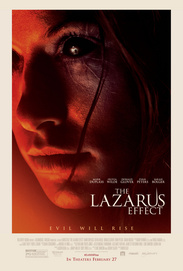 A group of researchers led by Frank (Mark Duplass) and his fiancÃ©e Zoe (Olivia Wilde) have achieved the unimaginable: bringing the dead back to life. When Zoe is accidentally electrocuted in a horrific accident, Frank and his team use their experimental serum to resurrect her. But their attempt goes horribly wrongâunleashing terrifying powers within Zoe that put all of their lives in grave danger.

Rated PG-13 for intense sequences of horror violence, terror and some sexual references.