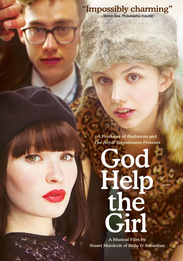 From writer/director Stuart Murdoch (lead singer of beloved indie pop group Belle & Sebastian) comes the most delightfully different musical of the year. Eve (Emily Browning) is a catastrophe-low on self-esteem but high on fantasy, especially when it comes to music. Over the course of one Glasgow summer, she meets two similarly rootless souls: posh Cass (Hannah Murray) and fastidious James (Olly Alexander), and together they decide there's only one thing to do: form a pop group.