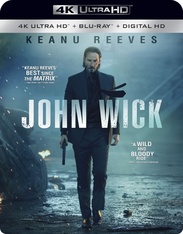 After the sudden death of his beloved wife, John Wick (Reeves) receives one last gift from her, a beagle puppy named Daisy, and a note imploring him not to forget how to love. But Johns mourning is interrupted when his 1969 Boss Mustang catches the eye of sadistic thug Iosef Tarasov (Alfie Allen). When John refuses to sell the car, Iosef and his henchmen break into his house and steal it, beating John unconscious and leaving Daisy dead. Unwittingly, they have just reawakened one of the most brutal assassins the underworld has ever seen.

Johns search for his stolen vehicle takes him to a side of New York City that tourists never see, a hyper-real, super-secret criminal community, where John Wick was once the baddest guy of all. After learning that his attacker is the only son of a former associate, vicious Russian crime boss Viggo Tarasov (Michael Nyqvist), John turns his attention to vengeance. As word spreads that the legendary hit man is after his son, Viggo offers a generous bounty to anyone who can bring John down.

With a veritable army on his trail, John once again becomes the remorseless killing machine the underworld once feared, launching a pitched battle against Viggo and his soldiers that could mean the end of them both.

Rated R for strong and bloody violence throughout, language and brief drug use.