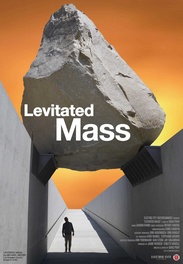 LEVITATED MASS is Doug Pray's new documentary about a two-story tall, 340-ton, granite boulder that was moved from a quarry in Riverside to the Los Angeles County Museum of Art and mounted atop the walls of a gigantic slot in the earth. The massive artwork, titled Levitated Mass, is the latest 'land sculpture' by one of America's most exciting and misunderstood artists, Michael Heizer. Heizer's sculpture references the expanse of art history -- from ancient traditions of megalithic stones to modern forms of abstract geometries and cutting-edge feats of engineering.

The boulder's 105-mile journey from quarry to museum attracted international media attention and challenged the imagination of thousands of Southern Californians over 10 nights as it crawled through 22 cities on a football-field length, 206-wheeled trailer. The film captures this spectacle while weaving together the dramatic story of the reclusive Heizer, the ambitions of a major metropolitan museum, and the public's wild reactions to this massive display of modern yet eerily timeless conceptual art.