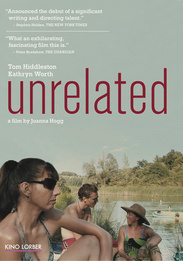 Anna (Kathryn Worth) arrives in Italy to stay with her school friend Verena (Roscoe) and her family in their rented villa in Tuscany. Her partner Alex was meant to accompany her, but Anna tells Verena (at the last minute) that he has to stay in London due to his work.

Over the course of the film it become apparent that Anna took the holiday to get some time away from Alex, following a heavy argument. The group is split into an unspoken line between the "olds," Verena, her new husband Charlie (Hadley) and Verena's cousin George (Rintoul), and the "youngs," Verena's two teenage children Jack (Lloyd-Hughes) and Badge (Emma Hiddleston), Charlie's son Archie (Kershaw), and George's son Oakley (Tom Hiddleston).

Trying to escape her relationship worries with Alex, Anna finds herself spending increasingly more time with the teenagers, upsetting Verena. She joins in with their mild hedonism, even promising not to tell their parents about their dope smoking and a drug and drink-fuelled car accident in a borrowed car.

The simmering sexual tension and flirtation between Anna and Oakley, the teenagers' ringleader, comes to a head when she invites him in to spend the night but he turns her down. Anna eventually tells Verena about the car accident, getting the teenagers into serious trouble and causing Oakley to have an appalling fight with his father. Totally rejected by the teenage group as a result, Anna leaves the villa and checks in to a local hotel. Verena seeks her out, and the two reconcile after Anna reveals she has discovered that she can't have children.

She returns to the villa with Verena, is reconciled with the teenagers, and stays on for a few days after the rest of the party have left.