The World Made Straight 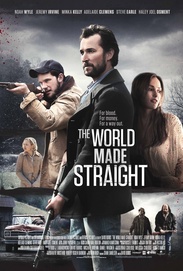 Set in the early 1970s, The World Made Straight is an adaptation of North Carolina writer Ron Rash's acclaimed novel of the same name. In a rural Appalachian community haunted by the legacy of a Civil War massacre, young and rebellious Travis Shelton (Jeremy Irvine) finds himself ensnared in the violence of the past and the subtle evils of the present.