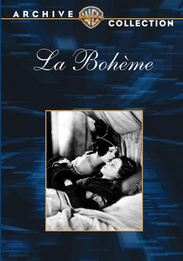 Mimi and Rodolphe's tragic love has been immortalized as a novel, a play, a Puccini opera, the inspiration for Broadway's Rent and in film -- including this superb version. King Vidor (The Big Parade) directs two of the greatest stars of the silent-film era: Lillian Gish, frail and lovely as Mimi, and John Gilbert, all artistic fire as the aspiring playwright Rodolphe. Living in the Bohemian district of 1830 Paris, the two suffer through poverty, jealousy and heartbreaking separation. The peerless Gish brought conviction to Mimi's death scene by refusing water for three days, displaying the dedication that helped the actress create "one of her most affecting portrayals of tremulous pathos" (John Douglas Eames. The MGM Story).