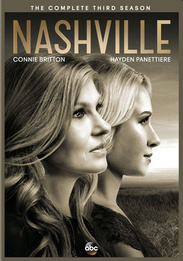 The stakes  and the heat  continue to rise to a fever pitch in the explosive third season of ABC's Nashville. For superstars Rayna James (Connie Britton) and Juliette Barnes (Hayden Panettiere), the choices they make will have far-reaching, life-altering consequences. Desperately torn between Deacon and Luke, will Rayna trust her heart or her head? And after Juliette makes a shocking discovery, can she repair her relationship with Avery  even in the wake of her staggering act of betrayal? Meanwhile, a fragile Scarlett cleans up her act, moves in with Deacon and tries to help him through a devastating personal crisis.