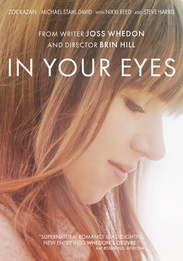 Written and executive produced by Joss Whedon, In Your Eyes is a romance with a supernatural twist. Rebecca (Zoe Kazan), a lonely housewife in New Hampshire, suddenly discovers that she shares a strange connection with Dylan (Michael Stahl-David), a struggling ex-con in New Mexico...they can see through one another's eyes and experience sensations felt by the other. Though they've never met, the two share a unique, unparalleled intimacy by being in each other's heads and begin a long-distance relationship unlike any other. Filled with Whedon's signature humor and quirk, the film is an original story of opposites attracting that sacrifices neither its sci-fi nor romantic sensibilities.