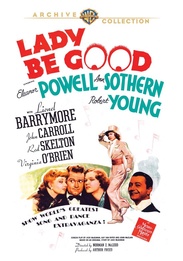 A husband-and-wife songwriting team (Robert Young and Ann Sothern) sure know how to turn out the hits, from "Lady Be Good" to "The Last Time I Saw Paris." But when it comes to marriage, they can't seem to hit anything but sour notes. Red Skelton, Eleanor Powell and Lionel Barrymore join the two stars in this lavish musical loosely based on the Fred and Adele Astaire stage smash. Lady Be Good overflows with grand tunes from start to finish (including two by the Gershwins, which explains why the Young/Sothern duo makes straight for the big time). Highlights include Powell toe-tapping around her posh apartment with an adorable pup, a dazzling title-tune montage and a Busby Berkeley-directed "Fascinating Rhythm" featuring the legerdemain of Powell and the sensational Berry Brothers. To top it all off, Sothern sings the Academy Award -winning* "The Last Time I Saw Paris" (Jerome Kern/Oscar Hammerstein II), a tune particularly poignant in an era when Paris was in the hands of the Nazis.