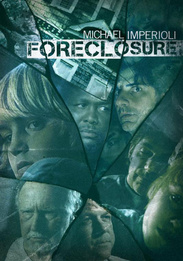 Bill Landopolous (Michael Imperioli of The Sopranos and Goodfellas), his son Steven (Spencer List, Black Dog, Red Dog) and his father-in-law Ray (Bill Raymond, Damages, Michael Clayton) move into the Queens, New York, home of their recently deceased relative Cal, who took his own life. The three hope to put their cares behind them and start afresh. But things get off to a shaky start when a local police officer (Matt Servitto, The Sopranos) points out all the numerous foreclosures, bank-owned properties and short sales that have depopulated the once-attractive neighborhood he patrols. Will such a desolate street be healthy for these three damaged people? At first, moving into the new (old) house turns out to be a tonic for the stressed-out Bill. He cleans out Cal's rank old refrigerator and spit-shines his business shoes. Bill even manages to tolerate the racist rants of his half-medicated, nearly senile father-in-law. But the rants, which begin as complaints about Bill's Greek heritage, become an ever-present echo of the past when young Steven, exploring the dank basement, discovers an old black-and-white photograph of a lynching. Soon, Steven and his father and grandfather come to suspect that it's not just the three of them living in the house.