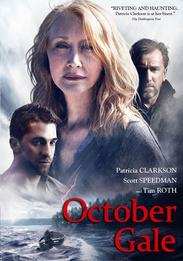 A killer stalks a remote island in this edge-of-your-seat thriller starring Patricia Clarkson, Scott Speedman, and Tim Roth. Helen (Clarkson), a recently widowed doctor, returns home to her isolated cottage off the Canadian coast to find a stranger with a gunshot wound (Speedman) hiding out from two men intent on killing him. As an ominous storm brews outside, trapping the pair on the island, they must join forces to survive a harrowing night of terror, while navigating the mounting attraction growing between them. Full of hairpin plot twists and unrelenting tension, October Gale is a grippingly suspenseful spine-chiller.