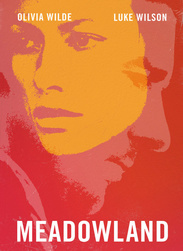 In the hazy aftermath of an unimaginable loss, married couple Sarah (Olivia Wilde) and Phil (Luke Wilson) come unhinged, recklessly ignoring the repercussions. Phil, a New York City cop, starts to lose sight of his morals as Sarah puts herself in increasingly dangerous situations, falling deeper into her own fever dream. The directorial debut of cinematographer Reed Morano, Meadowland is a visceral exploration of grief and hope.

Rated R for language, a scene of strong sexuality and some drug use.