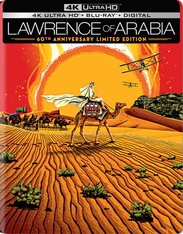 Winner of 7 Academy Awards® including Best Picture (1962), LAWRENCE OF ARABIA is the epic true story of how a WWI British army officer united rival Arab tribes in their war against the Turks, and in the process became a living legend. Complete with spectacular battle sequences, stunning desert vistas and Peter O'Toole's larger-than-life performance as the heroic T.E. Lawrence, this is grand-scale action and excitement at its very best.