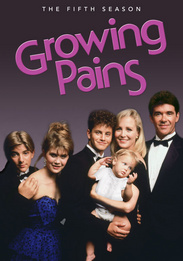 It's a good thing they've got each other, because Growing Pains' fifth smash season doesn't hesitate to throw some mighty big challenges at the Seaver clan. As if Mike's (Kirk Cameron) sudden engagement to Julie, the family babysitter, wasn't enough, Carol (Tracey Gold) finds her college plans derailed, while Ben (Jeremy Miller) starts to take after big brother Mike in all the wrong ways! It's a good thing youngest Seaver Chrissy is still too small to put Jason (Alan Thicke) and Maggie (Joanna Kerns) through their paces - so far! Among the special guests found in this 3-Disc, 26-Episode collection are Jane Powell, Gordon Jump, Hank Azaria, Jennie Garth, and Chelsea Noble in a season that starts with near-matrimony and ends with a real funeral. Along the way, Mike returns to high school... as a teacher, Carol begins to mend her broken heart, Ben tries his hand at filmmaking, and Jason and Maggie revisit their domestic arrangement.