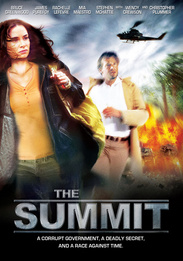 As greed and power collide, a mother losing her son and a documentary filmmaker must get the attention of the world's most powerful leaders before an experimental drugs becomes a biological weapon that will threaten the future of the entire planet. With the help of the CDC's bio-terror expert, they must race against time and across continents to crash The G8 Summit where the U.S. President and Canadian Prime Minister are meeting.