King of the Hill: The Complete Eleventh Season 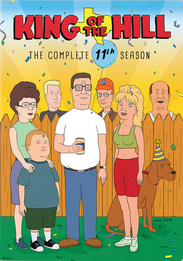 A hilarious slice of middle-class life in small-town America, âKing of the Hillâ has become one of the most beloved and long-running prime-time animated series in television history. Outrageously funny but remarkably truthful, the series follows the exploits of propane salesman Hank Hill (Mike Judge) as he reigns over a family of underachievers, a group of beer-guzzling friends, and the everyday challenges of life in Arlen, Texas. Comprised of all 12 episodes from season eleven, this collection features guest appearances by John Goodman, Will Arnett, Chris Elliott, Trace Adkins, Wyat Cenac, Randy Savage and ZZ Top.