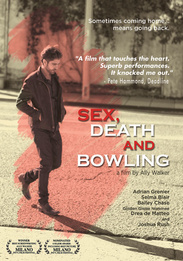 Eli McAllister, our eleven-year-old hero, is on a quest. He is also setting out to win The Fiesta Cup, a local bowling tournament. Joining him is his famous fashion designer uncle, Sean McAllister. Sean hasnât spent time with his family â specifically his father â for years. But now he has come home to bid farewell to his older brother, Eliâs father. Thrown into the tournament as his ailing brother's substitute, Sean clashes with his father as old wounds are opened. But instead of reliving the past, they pull together to bowl their best for Eli who stands to lose so much. Funny, sweet and soulful â SEX, DEATH AND BOWLING takes us on a journey to learn that the secret to life is loving what you have â even if it is just a split.

Rated R for some language.