King of the Hill: The Complete Thirteenth Season 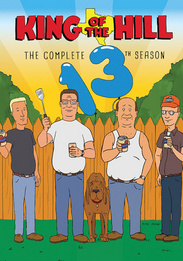 A hilarious slice of middle-class life in small-town America, âKing of the Hillâ has become one of the most beloved and long-running prime-time animated series in television history. Outrageously funny but remarkably truthful, the series follows the exploits of propane salesman Hank Hill (Mike Judge) as he reigns over a family of underachievers, a group of beer-guzzling friends, and the everyday challenges of life in Arlen, Texas.