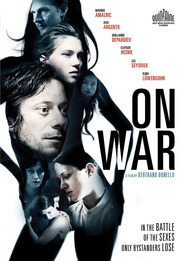 After a freak accident, Bert (Mathieu Amalric), gets locked in a coffin overnight â scaring him profoundly and moving him to change his life. He decides to stop focusing on work and seek pleasure. When he encounters a strange man, Charles (Guillaume Depardieu), offering him the ultimate pleasure in a placed called The Kingdom - Bert decides, what the hell and goes with him. Instead of pleasure, he finds himself in the middle of a war between the sexes led by sexy and strict Uma (Asia Argento), chased by a young woman, Maria (Lea Seydoux) befriended by the mesmerizing Rachel (Elina Lowensohn), and thatâs when it gets weird. Find out who wins, who loses and whether Bert can ever return to ânormalâ.