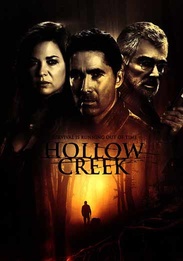 Co-starring Academy Award-nominee Burt Reynolds (Boogie Nights, Deliverance), Hollow Creek is a terrifying, thrilling mystery guarenteed to send shivers down your spine. Trying to find inspiration for his next horror novel, Blake Blackman (Steve Daron, Shadow Fighter) retreats to a remote cabin in the Appalachian Mountains. He is secretly accompanied by his mistress Angelica Santoro (Guisela Moro, Seven Deadly Words), a book illustrator. Upon arrival they hear an amber alert on the radio and first learn about the case of several boys missing in the local area. A twist of fate turns the romantic retreat into an abduction-murder case, when Angelica follows a lead to one of the missing boys and mysteriously goes missing. Blake then becomes the number one suspect in her disappearance.