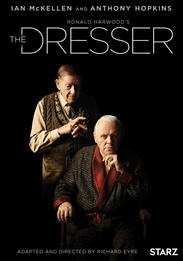 One fateful night in a small English regional theatre during World War II, a troupe of touring actors stage a production of Shakespeare's "King Lear." Bombs are falling, sirens are wailing, the curtain is up in an hour but the actor/manager Sir' (Anthony Hopkins) who is playing Lear is nowhere to be seen. His dresser Norman' (Ian McKellen) must scramble to keep the production alive but will Sir turn up in time? And if he does, will he be able to perform that night?