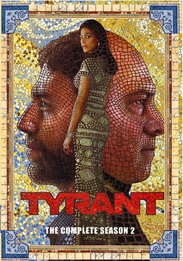 In the second season of this gripping drama, Barry Al-Fayeed (Adam Rayner) who has returned with his family to his Middle Eastern homeland after 20 years in the U.S. realizes that his brother Jamal (Ashraf Barhom), now president of Abuddin, lacks any sense of justice or morality. Covertly working with the U.S. government to overthrow his brother, Barry is eventually found out and arrested to face charges of treason. While Barry's wife Molly (Jennifer Finnigan) waits terrified and alone in the U.S. embassy for news of her husband's fate, her only comfort is that their teenaged children were able to escape back to the U.S. Meanwhile, Molly's mother-in-law Amira (Alice Krige) pleads with her eldest to be lenient, while Jamal's wife Leila (Moran Atias) revels in her new role as First Lady.