The Golden Age of Musicals 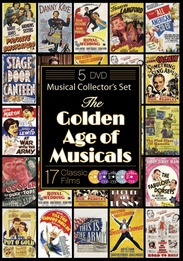 Considered the Golden Age of musical film, the 1930s through the early 1950s saw the genre's popularity at its highest in the Western world.Â  The musical film genre was a natural development of the stage musical after the emergence of sound film technology.Â  Songs were sung by the characters and interlaced into the storyline, sometimes accompanied by dancing and elaborate choreography.Â  The multiple camera angle shots and the use of lavish background scenery and locations that would be impractical in a theater, is what marginally differentiated film from stage musicals of the era. The taste in musicals increased dramatically in the mid 1930âs when director Busby Berkeley began to enhance the traditional dance number in his unique style that typically begin on a stage, but gradually transcended the limitations of theatrical space. His creative routines involved human bodies forming patterns like a kaleidoscope, with the intended perspective being viewed from straight above.Â Â  As the motion picture industry developed with the introduction of such things as special effects, better quality film technology and Color, the musical genre experienced sustained popularity for a few decades. The Golden Age of Musicals features 17 fabulous musicals from during the genreâs pivotal 20 years between 1937-1957. The package contains over 25 hours of song, dance, and comedy that will dazzle and entertain you with everything from slapstick to romance and over-the-top opulence.Â  The Golden Age of Musicals will joyously take you back to the biggest musical films and stars of the era including Fred Astaire in Second Chorus, Danny Kaye in The Inspector General, Bing Crosby and Bob Hope in Road to Bali, Dean Martin and Jerry Lewis in At War with the Army, and Judy Garland in Till the Clouds Roll By.