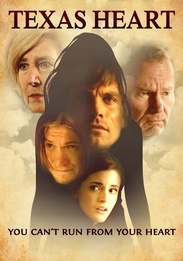 TEXAS HEART tells the story of PETER FRANKLIN, a crooked lawyer who's caught up in a loveless existence, loses a critical case for the mob, and runs off to hide out in a backwoods Texas town. There, after changing his name to Frank Stephens, he quickly encounters a compelling story involving a young man, TIGER MILLS, who's falsely accused of killing a beautiful girl, ALISON BLEVINS. Tiger, despite being 'mentally challenged,' nurses a private love for Alison who meanwhile is dating Tiger's younger brother, ROY, a good-looking, testosterone-driven football star on the local high school team. After an angry fight with Roy, Alison goes missing but compelling evidence (including the girl's blood-stained clothes found in Tiger's truck) points to Tiger. Watching this crisis over a missing (and presumed murdered) girl unfold right before him is Frank who is himself hiding out from the mob in an abandoned house across from the Mills. Frank soon faces an agonizing choice: ignore the case in order to remain anonymous and far from the prying eyes of the mob that are still looking for him or reach out and try to save the young man. After a shocking twist in the case, Frank makes a choice that changes everything--for the young man and for himself.