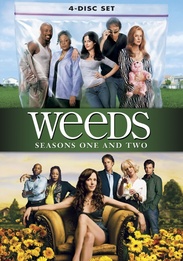 Is the grass really greener on the other side? Yes, and it smells better, too! So when Nancy Botwin (Golden Globe winner Mary-Louise Parker) faces both sudden widowhood and poverty, she's determined to do anything to keep her kids in suburbia, including taking a job as the neighborhood pot dealer. Subversive, satirical and hilarious, the first and second season of this groundbreaking Showtime hit is guaranteed to spark laughter!